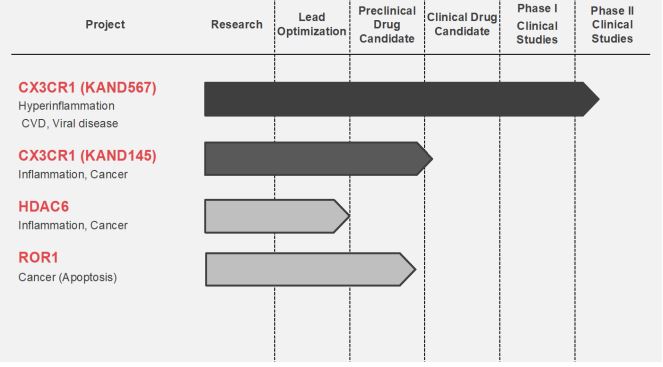 Kancera is developing small molecule drug candidates KAND567 and KAND145, both of which block the Fractalkine receptor CX3CR1 and thus specific parts of the immune system. The first group of disease states to which Kancera’s Fractalkine blockers are directed are those driven by so-called hyperinflammation. Hyperinflammation is a term that summarizes a kind of excessive activation of the immune system that leads to tissue damage. Such  hyperinflammation occurs, amongst other times, in connection with physical stress or injury such as vasodilator treatment after myocardial infarction and in response to certain viral infections such as SARS-CoV-2 (and the disease COVID-19).

Expansion opportunities for blockers of the Fractalkine system are also being evaluated in other inflammatory diseases and cancers.

• For two years until the fourth quarter of 2020, Kancera’s HDAC project has been developed in partnership with and financed by the pharmaceutical company Grünenthal in order to counteract nerve inflammation and pain. Kancera has now taken over the rights to results generated during the collaboration with Grünenthal and intends during the second first half of 2021 to decide on the next step for the project.

• Kancera’s ROR inhibitors are being developed for the treatment of cancer. Inhibitors of ROR reprogram cancer cells so that they destroy themselves. In preclinical disease models, ROR inhibitors have been shown to work on cells from both solid tumors and blood cancers (leukemia and lymphoma). The ROR project is mainly financed through academic collaborations in which the external party bears its own costs.

• Kancera’s PFKFB3 project, which has been funded within an EU project, is planned to be phased out during the first quarter of 2021. This is done in favor of an increased investment in an exploratory preclinical evaluation in 2021 of the possibility of developing KAND145 for the treatment of cancer and autoimmune diseases.