Great medical need but lack of innovation, until now.

The problem:
Inflammation causes half of the tissue damage in a heart attack 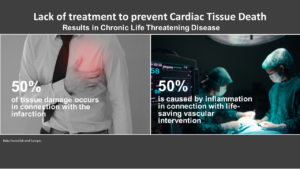 Each year, about 7 million people suffer from heart attacks worldwide (Myocardial Infarction: WHO 2002). A quarter of these die or suffer further serious heart disease within five years. A heart attack occurs when any of the coronary arteries is blocked by, for example, a blood clot. When the tissue around the blockage does not get oxygen, the heart muscle cells die. The more cells that die, the more extensive the permanent damage to the heart and its function. The size of the tissue damage is therefore crucial for the risk of suffering from new infarcts or chronic impaired cardiac function.

An acute myocardial infarction is usually treated with balloon dilation, where the narrowed vessel is opened. This measure is necessary to save lives, but today it is also known that up to 50 percent of the damage to the heart occurs in connection with releasing the blood flow into the vessel again. The reason is assumed to be that the patient’s immune system in this situation generates an inflammation – a completely normal reaction when the body has to deal with an injury – but which in this case has fatal consequences. When the blood flows into the blood vessels again after a balloon dilation, inflammatory cells are transported to the damaged muscle tissue of the heart to begin healing. But since the immune system tends to overreact in the acute phase, the effect becomes the opposite – the inflammation itself causes great damage to the heart.

Currently there is a lack of effective drugs to minimize acute tissue damage in myocardial infarction, but the relatively new knowledge that the inflammatory process accounts for such a large part of the injury has opened up for completely new types of treatments. If one can slow down the inflammation that occurs in the heart and vessels after balloon expansion, one could potentially save even more lives in the acute phase and reduce the long-term damage that contributes to new infarcts as well as to chronic heart failure.

Click here for the latest project and patent report.