From acute to chronic
In parallel with the fact that KAND567 is being evaluated for the treatment of the acute inflammation that occurs during myocardial infarction, there is every reason to investigate effects in chronic inflammatory diseases. In animal studies, KAND567 has been shown to be effective against atherosclerosis, nerve inflammation, pain and multiple sclerosis.

Interest in the Fractalkine system from the global pharmaceutical industry is growing:

•  Boehringer Ingelheim is in phase 1 clinical trials developing an antibody against the fractalkine receptor for the treatment of chronic kidney disease.

• Eisai has a biological drug candidate under development that blocks the Fractalkine system and which in clinical studies has shown efficacy against Crohn’s disease and rheumatoid arthritis.

The fact that blockers of the Fractalkine system have thus been shown to drive inflammatory diseases in humans also increases the likelihood of Kancera’s Fractalkine projects yielding desired results. The fact that interest from large pharmaceutical companies is growing is also apparent from the scientific literature, where new knowledge is being published about how the Fractalkine system affects more and more diseases. Kancera’s small-molecule drug candidates have the potential to be more effective than Eisai’s antibodies in the treatment of acute ischemic cardiovascular disease and cancer since small molecules, as compared to antibodies, penetrate more effectively into tissues with low blood flow. In other diseases, there is reason to consider a combination of the two approaches to achieve the best effect.

From cardiovascular disease to cancer
The recent decade’s increased focus on the role of the immune system in oncology also paves the way for Fractalkine blockers to become a component of future cancer treatments. In parallel with the clinical development program of intravenous KAND567 against tissue damag 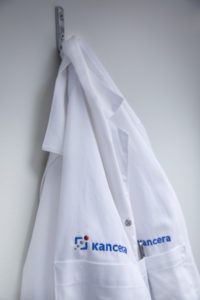 e in myocardial infarction, Kancera is evaluating the possibility of taking the drug candidate further in the cancer area.

In a study of immune cells from 66 patients with lymphoma, a statistically significant activation of the Fractalkine system was shown in the blood compared to samples obtained from healthy individuals. The activation indicates that KAND567 may affect the cancer, but further studies are required to determine the role of the Fractalkine system in tumor biology and in which way it can possibly be used in future cancer treatments.

• There are currently no drugs that can counteract the damage to the heart in the acute phase.

•  A phase IIa study with KAND567 in cardiac infarction patients is being prepared for the start during the first half of 2020, and that results can become available within 12 month from the start.

• Positive results from the planned Phase II study would be transforming for Kancera. Not only for the continued development of KAND567 in the heart attack area, but also for development in other commercially attractive indication areas where the need for improved treatments today is great. Cancer and chronic inflammatory diseases are two examples.